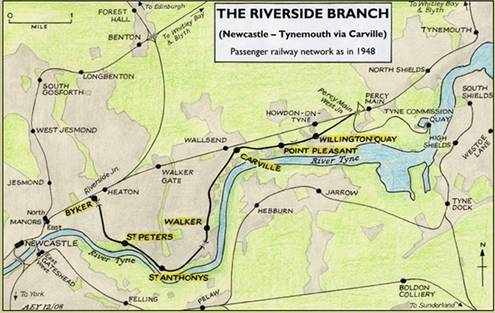 The 6½ -mile Riverside branch (actually a loop, rather than a branch) was authorized on 13 July 1871 from Riverside Junction, between Manors East and Heaton, to Percy Main. The branch was required because the Newcastle to North Shields line via Wallsend did not serve rapidly growing communities and industries along the north bank of the River Tyne in the Walker and St Peters areas.

‘The route consisted for the most part of tunnels, bridges, cuttings, retaining-walls, and embankments – an exceptionally heavy series of works’  and it pursued a strikingly indirect path compared with the route via Wallsend. The Byker to Carville section followed the meandering River Tyne; the remainder ran almost parallel to the Wallsend line for two miles and for much of this distance the lines were in sight of each other.

When the Riverside branch was opened by the North Eastern Railway on 1 May 1879 stations were at St Peters, St Anthony's, Low Walker (Walker from 13 May 1889), and Willington Quay.  Carville opened on 1 August 1891. Byker and Point Pleasant opened for advertised passenger services on 1 March 1901 and 1 January 1902 respectively having previously been untimetabled stations for workmen. 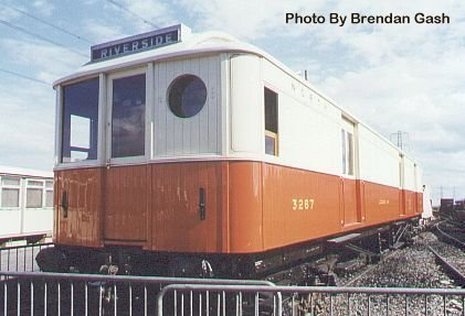 This vehicle was one of the original stock built for the 1904 Newcastle to Tynemouth electrification scheme, called Motor Luggage Vans
Newcastle suburban lines entered the 20th century with steam-operated services. Although street tramways had existed on Tyneside since 1879, the expansion of the system and electrification from 1901 provided strong competition to the railways. In that year Walker and Wallsend / Carville were served by the new trams, and in 1902 ten-minutely electric trams of the Tyneside Tramway began to capture traffic from Point Pleasant and Willington Quay.

The approximately hourly weekday trains were no match for the trams. Between 1901 and 1903 the suburban lines north of the Tyne suffered a 40% decline in passengers carried. On the advice of C.H.Merz and W McLennan the NER resolved ‘to fight the devil with fire’ and swiftly electrified the local network using a third-rail 600v DC system. Nine months after electrification was approved, an electric train did a trial run on 27 September 1903 between Carville and Percy Main. The first regular electric service in the area began on 29 March 1903 between Newcastle (New Bridge Street) and Benton. Newcastle – Tynemouth via Riverside and via Wallsend services were inaugurated on 1 July 1904. Steam traction was retained for goods movement.

More info on electrification can be found at: http://easyweb.easynet.co.uk/~gsgleaves/tyneo.htm 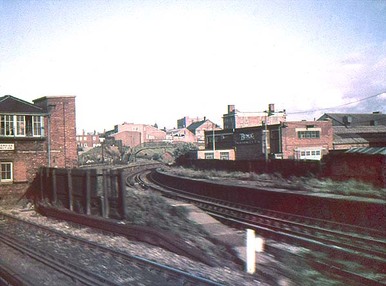 The junction of the Riverside branch from the Newcastle and Shields Railway at Byker. Now Morrisons carpark.
More details about the Riverside Branch can be found at the following website: http://www.disused-stations.org.uk/p/percy_main/index.shtml