For centuries the North-East was the main coal-producing area of England because of its easily-accessible seams and navigable rivers. As the demand for coal increased during the eighteenth century, new collieries had to be sunk further away from the rivers, and wagonways built to carry the coal to staithes on the river for shipment. Such expansion was only possible through the investment of large sums of money and to obtain these local landowners sometimes joined in partnership. One of these was that made between the families of Wortley, Ord, Liddell and Bowes, known locally as "The Grand Allies", which was dated to run for ninety-nine years from November 1726. From its beginning this partnership dominated the coal trade, with collieries in both Durham and Northumberland. In our immediate area the wagonway names of Bowes, Jarrow and Pontop were familiar, but most familiar of all was the Tanfield wagonway. 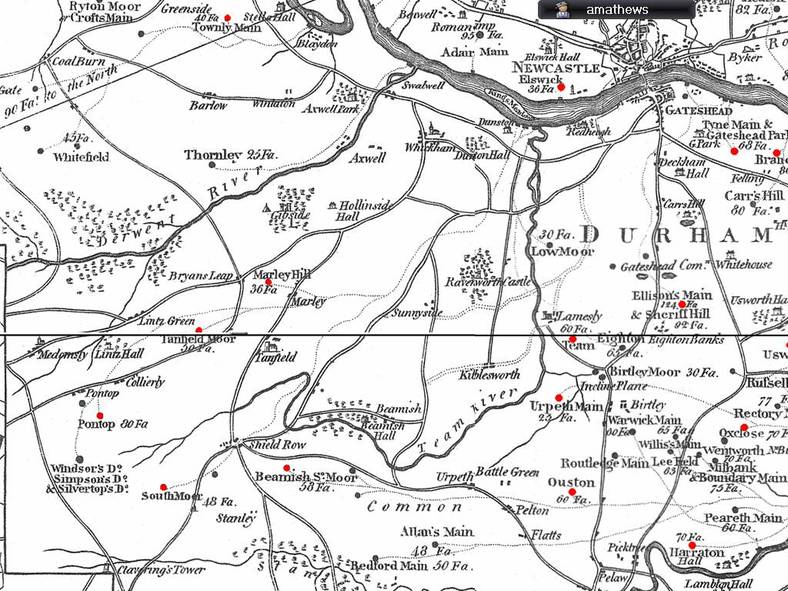 Map of 1807 showing existing wagonways to the Tyne
In c1830 the area of north-west Durham, between the River Tyne and the Pontop-Tanfield, Beamish region some eight miles to the south, was traversed by a number of wagonways engaged in moving coal from mines to riverside staiths. Some focused on the Tyne but the Beamish wagonway connected the mines in that district with staiths on the River Wear.

There were two major lines running to the Tyne. One of these was the Main Way from the Pontop-Dipton district to Derwenthaugh staiths, via Bryan's Leap at Burnopfield, Rowlands Gill and the valley of the River Derwent. The other was the Tanfield wagonway, or Old Way, from the Tanfield Moor region to Dunston staiths via Tanfield Lea, Marley Hill and Lobley Hill. Both were over a century old for much of their routes, and in the middle of the eighteenth century they had been linked together by a branch from Tanfield Moor colliery running north-westwards to join the Main Way.

The Main Way itself, north of Bryan's Leap, dated from about 1710, while most of the Tanfield line dated from 1725-7. The latter had originally extended across the Beckley Burn near the Causey by means of the 103ft span Causey Arch, or Dawson's Bridge, to reach Dawson's Drift colliery. The arch was of stone, carried two lines of rails and was built in 1727; it was often referred to as the world's oldest railway bridge. A diversion of the line some thirty to forty years later made the bridge redundant, but it still stands today. Nearby, the line also included some notable cuttings and an embankment 100ft high and 300ft broad at its base. 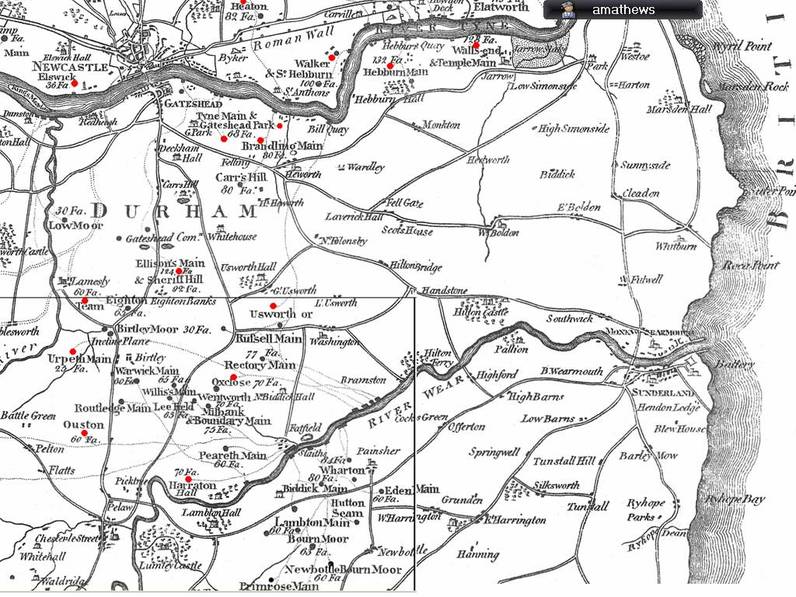 1807 Map showing existing wagonways to the River Wear
By the early years of the nineteenth century the Main Way south of Rowlands Gill had fallen into disuse but it had extended its Thornley branch from Winlaton Mill eastwards to Spen (Garesfield). Garesfield colliery developed here after about 1837 and the mining village of High Spen grew up.

The Tanfield line reached to South Moor and Pontop and had a short branch to Marley Hill colliery, with the Tanfield Moor colliery probably the most productive over a long period of the collieries served by the line.

The Beamish wagonway, running approximately east to west from Fatfield staiths, reached Beamish South Moor, and had long branches to Pelton Moor and to Deaney Moor near Sacriston. This latter branch was known as the Waldridge wagonway. By 1830 most of the coal from the Pontop, Tanfield and surrounding districts went to Dunston, while the Beamish, Pelton and Waldridge areas sent most of their coal to the Fatfield staiths. The former Main Way had become the Garesfield wagonway, serving a limited area near Rowlands Gill.