The Newcastle King Edward VII 'High Level' bridge
The Newcastle and Berwick Railway Company, which had been in competition with the Northumberland Line, was given the go ahead to lay the tracks from Newcastle on Tyne to Berwick in July 1845. Robert Stephenson was the railway's engineer, though most of the line engineering was undertaken by Thomas Harrison under Stephenson's supervision. The line was completed, except for the bridges, in July 1847. Temporary timber viaducts were used in the meantime.

Both companies had put forward different plans.The Northumberland Company had hoped to build a low level bridge across the Tyne and lay track for 2,410 yards under the town. The Newcastle to Berwick Railway proposed to build a High Level Bridge to span the Tyne and to allow coaches, carts and foot passengers to cross. In Newcastle there would be a Central Station, which would handle all the passengers from Gateshead station, which was about 500,000 annually, and the passengers from the Newcastle to North Shields Line, which was about 850,000 annually.

The proposal of the Northumberland Company was to have an atmospheric rail system which was experimental. The Yorkshire Newcastle and Berwick Railway was to be a conventional railway, and although the Northumberland line was going to cost £1,000,000,  the more expensive Yorkshire Newcastle and Berwick railway costing £1,400,000 was selected as it would have more branch lines going to Blyth and Tynemouth. 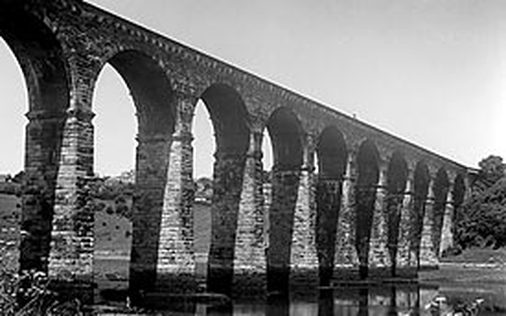 Royal Border bridge, Berwick upon Tweed
The buliding of the Newcastle to Berwick line enabled Robert Stephenson to bring three world class projects to a conclusion in one year, 1849-50. All of which continue to out perform their specification one hundred and fifty years later.

The First is the High Level Bridge which spans the Tyne at Newcastle and was opened on September 28th 1849, the second was his collaboration with John Dobson in the construction of Newcastle Central Station and finally the magnificent Royal Border Bridge at Berwick upon Tweed.

A grand banquet was held under the great roof of the Central Station on the 30th of July, 1850, to honour Robert Stephenson and to celebrate the completion of the line of iron between London and Edinburgh. 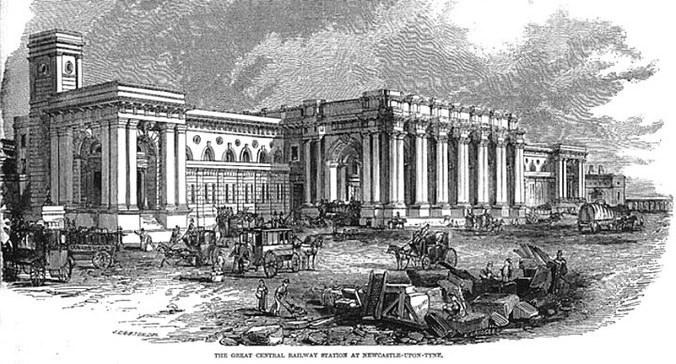 Central Station, Newcastle designed by John Dobson (1787-1865).This image is from the 10th of August 1850 issue of Illustrated Evening News.

The NER was formed on 31st July 1854, by the amalgamation of the York Newcastle & Berwick Railway; the York & North Midland Railway; the Malton & Driffield Railway; and the Leeds Northern Railway. The two York railways were amongst the remnants of George Hudson's empire. The York & North Midland was very much Hudson's power base, and the York Newcastle & Berwick Railways was a part of his plans for a railway to Scotland. Despite Hudson's problems, much of this plan had been completed. Newcastle Central Station and Berwick's famous Royal Border Bridge had both been triumphantly opened in 1850 by Queen Victoria, completing the north section of what would become known as the East Coast Main Line.

Over the next nine years, the NER and Stockton & Darlington Railway came to dominate the north east. Both would grow by absorbing smaller railways or building new lines. A notable NER acquisition was that of the Newcastle & Carlisle Railway in 1862. This had built the first railway across the Pennines in 1838.

By 1863, the S&D could hold out no longer, and on 13th July it merged with the NER. This resulted in the NER having a near-monopoly on all railway traffic in the north east. This would prove very profitable over the next fifty years as Britain's coal industry reached its peak.