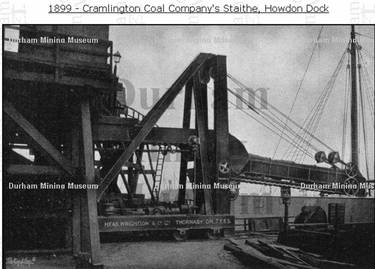 By the 1898 the O.S.map shows it as Cramlington Colliery Railway. It included an old engine house  and its Southern Terminus was at Cramlington Staiths in Northumberland Dock.

The railway was jointly owned by Cramlington & Backworth Collieries. It opened in 1823 and was extended to Shankhouse in 1847 & East Hartford in 1866, Dudley in 1854, West Cramlington in 1898 and Burradon in 1912. It may have been linked to the NER Riverside Branch.

In 1826 Seghill Colliery began sending their coals down the Cramlington line and the increase in traffic must have placed a great strain on the Backworth railway as the owners had been developing their colliery.

The increase in traffic down the Backworth part of the line caused severe congestion south of Murton Row. The situation became intolerable for the owners of Seghill and Cramlington Collieries as Backworth traffic would have priority. So, in 1839, the Seghill owners began constructions of their own line running parallel to the Cramlington line but turning south at Percy Main to reach their own staiths at Howden. This line was completed in 1840.

The Cramlington owners wanting to improve their position also built a new line in 1839 to eliminate their dependency on the Backworth line. This took the form of a by-pass branching off the old route at Murton Row and ran on an independent route to new staiths at Howden.